“How can I study less while getting better grades in university/school/college?”

In today’s episode, I explain how you can use the “-5+50 rule” to get better results while studying less as a student.

It’s all about preparation. Invest your time initially by organising, understanding and preparing. You will then reap the compounding effect of the investment as your semester goes on.

Episode 14 Transcript. How to Study Less and Get Better Results in University and College

This is the Successful Archi Student’s Podcast episode 14.

Welcome to the episode today. I want to talk about how to get better grades or better results at university by studying less. Throughout this episode, I’m going to be talking about something called the take five plus 50 rule, which is something I came up with to describe this process, I guess. And really what it means is that you’re putting in an initial or you’re taking 5% of extra time, at the start of initial effort and work from that 5% you’re receiving 50%, better results, and 50% less time spent overall on your projects. And what I want to start this off by saying is that in architecture school, we are given a brief or a project assessment guide. It’s kind of a criteria that we have to go through that describes everything that the client wants and everything that the teachers want from us in that project. And this is no different studying chemistry or studying business, you’re given a submission criteria sheet or exam requirements or something like that. And it’s exactly the same. You’re going to have this submission sheet that’s given to you and that describes everything you need to learn throughout the semester, and everything you need to do in your subjects. And in your Individually assessments and know in order to do well at those projects and assessments. And so the idea of this take five plus 50 role involves understanding the brief, completely understanding this information that your teachers have given you. Understanding that completely so that you’re, you know, everything that you need to know about the assessment so that you can start to prioritize the important work rather than just doing what’s urgent, because a lot of the time we will be I know that I used to do this a lot. I’ll be in, in architecture school, I’ll have these assessments coming up to the deadline. And I wouldn’t organize to have them completed before the deadline. And so what I found myself doing was, I’d be defending off these assessments as they were coming closer to the the weeks before the deadline. So where I had some projects that were worth 50% of my total grade, and these projects that were coming closer to the deadline, which are only 20% of my total grade. They were urgent I needed to get them done. And so I would put off doing the important work. In order to do the busy work, the urgent work that urgent work has said that really weirdly, but I hope you understand that. So the way that you can understand what’s important and what is urgent is by looking at the waiting that the teachers have given the assessments or the course, because in my architecture school, my design studio course, which is one of my courses, it’s worth twice as much as all my other courses just because it’s a whole lot more work. And so where a lot of people last semester spent their time working on these other projects that were coming up to the deadlines, which weren’t as important as our studio work. I was kind of not ignoring them, but I smashed him out as quickly as I could before the deadlines, so I didn’t have to worry about them. And then with all my extra time I was spending that was pretty much spending twice as much time on my studio work because it was worth twice as much as the other projects and so my effort in that important work. My design studio work rewarded me with a lot better

what happens if you do a really good project where you’ve spent that initial 5% of your time of the semester, organizing yourself preparing yourself and your teachers notice that and they recognize your hard work and I spend a lot of time with you will now build this connection with your teacher. They want to teach you more they want to mentor you. And what happens when you finish the semester, and they start talking to other architects, other people in the industry. And they say, Well, one of these architects says, I’m looking for an intern, do you know anyone, your teachers going to immediately just think of you, when they hear someone asked for that they need an intern. And so you just create yourself that opportunity from working hard from putting in that initial investment of time. So I hope you guys found it helpful. This has been me talking really fast. I hope you understood exactly what I’m saying. If not, I do go a lot more in depth about this in my new ebook. It’s called How to ace any project in architecture school, and it’s a step by step guide to achieving excellent results as a student of architecture. And so if you’re interested in learning more about that, you can visit the link in the description. There’s heaps of students that have gotten it and they’re loving it. I’m getting a lot of great feedback from it. I’m constantly making changes to it as well, so it’s always improving. I just want to say thank you guys so much for watching this video. In this episode of the successful students podcast If you enjoyed it, please subscribe to the YouTube channel or wherever you’re watching this on, please like it and leave me a comment. I’m always happy to read your comments and reply to them and respond to them and create some connections with you guys. So, thank you guys so much for watching, and I’ll see you in the next episode. 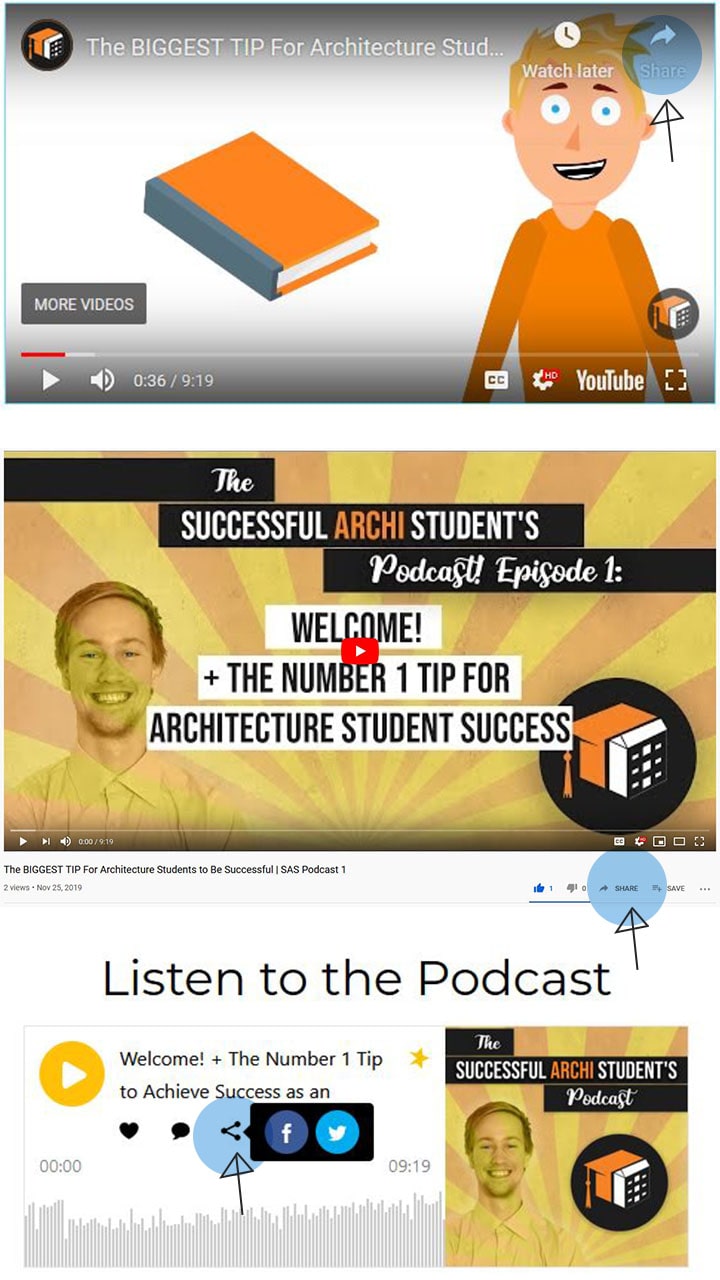